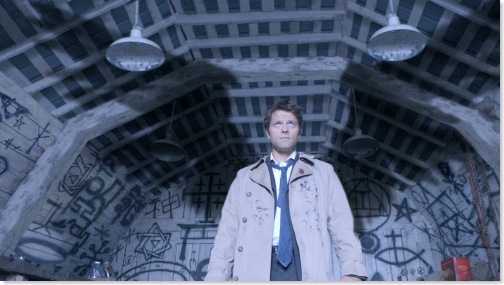 For most hockey ladies, we are kind of in love with this show called “Supernatural.”  Sam and Dean…now add hottie for the last few seasons, Castiel (the fallen angel)…we are just eye candied up every winter.

I recently got my brother hooked on this show over the holidays.  While we were in Target, I saw that Season 6 had just come out on DVD.  I grabbed it, was looking at the back of the cover reading it when this Target employee walks by, stops, shrieks at the top of her lungs, “OH MY GAWD! IS THAT THE NEWEST DVD OF SUPERNATURAL?”  I replied, “Yes.”  She shrieked again, grabbed a copy and ran off with it.

My brother had no idea what this was about.  He just thought it was some chick flick.  Oh, little did he know this was the type of show that was right up our alley.  Hell, we talk about apocalypses and angels and demons all of the time.  Yeah, these are the private conversations that we have had our entire life that no one would understand but Sam and Dean themselves.

When we got to the final episode of Season Six, Castiel proclaimed himself GOD and demanded that Sam, Dean and Bobby bow before him or suffer the wrath of GOD.  And then it kind of ended.  My brother yelled, “WHAT?  This can’t be how it ends!”

Well, I couldn’t wait until the next DVD, so I started watching the show online…only to find out that they killed off Castiel.  How the hell do they kill off Castiel?  I mean, HOW!?!?

So a little Googling just now and I found out Castiel is coming back!  He’ll be back in Episode 17.  Hallelujah!  Castiel LIVES!

Because following @MishaCollins (the guy who plays Castiel) isn’t enough…I need to see him as eye candy on Supernatural…and that season when he was in 24…that was pleasant, too.

I’m very happy to see him back on Supernatural.  I’m still laughing at that episode where the boys go into a different dimension and Sam and Dean are playing the actors that play them in the show.  They walk up to Misha Collins, thinking he’s Castiel, and start asking for help on how to get back to their dimension.  What was funny was that Misha exclaims he’s tweeting what happened!  Then he tweets it…he really tweeted it.  I started laughing hysterically, because I turned to my brother and said, “OMG!  He really did tweet that, because I remember him tweeting that months ago on Twitter!”

Speaking of hockey and Misha…I wonder what this Boston native and former White House intern would have to say about Tim Thomas snubbing the Presidential Office today.  I don’t think his praise would be up there.